A Citizen Approach to Tackling a Systemic Problem

While the panel in the Tuesday morning SHIFT20 session “Stop Wasting Waste—Upcycling Our Future” came together to discuss ways to stop food loss and waste, it soon became apparent that we can’t just solve part of the problem—the waste—without examining the systems that produce that waste.

While the panel in the Tuesday morning SHIFT20 session “Stop Wasting Waste—Upcycling Our Future” came together to discuss ways to stop food loss and waste, it soon became apparent that we can’t just solve part of the problem—the waste—without examining the systems that produce that waste. “We really need to collaborate and perhaps move to different types of innovation,” urged Sanne Stroosnijder, business development manager and program manager for sustainable food chains at Wageningen University & Research.

Stroosnijder also stressed that the industry and governments need “to see the benefit of working together,” and by doing so it ultimately “might create a huge opportunity.”

Based in locations around the world and with varying business backgrounds, each panelist brought a unique perspective to the issue of food waste. From the Netherlands, Stroosnijder shared a current food waste problem her country is facing—the “Dutch Potato Mountain.” 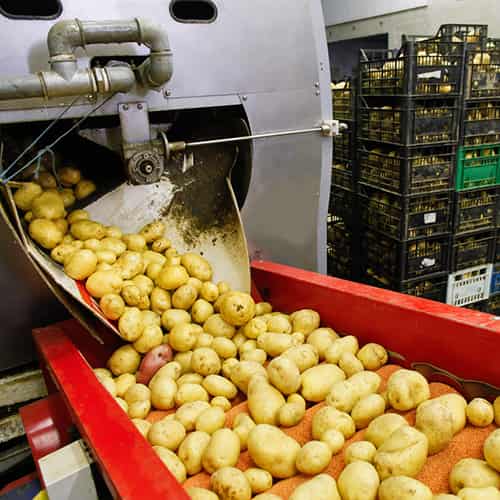 The Netherlands is home to five of the largest potato-processing factories in Europe and many of these potatoes are used to make fries that are distributed to foodservice locations throughout Europe. When the COVID pandemic hit Europe and restaurants were forced to shut their doors, the demand for fries dropped dramatically. Now, farmers and factories can’t sell their produce. And that’s how you end up with a 1-million-ton heap of potatoes jutting out of the relatively flat landscape, illustrated Stroosnijder.

Social initiatives, such as donating to food banks, and selling direct to consumers can help, but as Stroosnijder explained, even when the nation comes together for a “potato rescue day” it only ended up accounting for 0.01% of the potato supply. “The direct sales to consumers are nice for creating awareness about the problem and giving a few farmers a fair price for their produce, but it’s obviously not contributing to the large-scale solutions that we need,” said Stroosnijder.

Jeff Daniel, president of the products group at Blueflux Power, shared with attendees what he sees as a potential solution—creating the circular economy, one community at a time. Describing a venture to be announced next week, Daniel explained that his company is working with a group to implement a smart city in a community in the United States. The design will fit on 250–300 acres with around 1,000 residents as a part of the community.

The structural building blocks of a smart city, as Daniel calls them, rely on technologies that exist today or are coming out soon. “If you think about creating a viable circular economy, though, it gets more complex than that,” said Daniel. “We want this thing to be a living lab … and it has to be commercially viable.” If we do things that are prerequisitely required to have assistance from a government to make it exist, it will never happen at scale around the world.”

Restructuring cities and building new ones to be “smart” is certainly not the fastest way to make a dent in the food waste problem. To get there faster, Sotiris Bantas, founder, president, and CEO of Centaur Analytics in Greece, proposed that we need to fix today’s supply chain with data. While he admits that his approach is still a concept and “far from a complete systemic approach or solution to making our economy more circular and more waste resilient and aware,” it is extrapolated from his work with data in the supply chain from farm to retail. Bantas has identified “choke points” where lack of data and visibility are hindering the supply chain from working as effectively as it could.

His solution is to use technology that already exists today to monitor the supply chain at each step so that we can make data-informed decisions. The result would be a more flexible system. For example, Bantas explained that if a cargo ship of soy departing from Latin America and destined for China has sensors on board to detect product quality, it might be possible to reroute the ship to Europe if the data reveals that the soy might not withstand the journey to that more remote location.

A “glaring lack of information and data” that Bantas has observed is our visibility to food storage systems—silos, grain elevators, and shipping vessels that exist around the world. “Those rivers of data, once we are able to use them and analyze them properly, will help us to recoup waste, prevent waste, and mitigate it,” said Bantas.

During the live Q&A portion of the session, Aimé Recinos asked the panelists “How can we, as students and citizens, promote the adoption of it [programs to mitigate waste]? How can we convince our governments to adopt a circular economy and create smart cities?”

“Consumers need to take the power in their own hands,” instructed Bantas. Providing them an abundance of data so that consumers can make informed decisions is “basically democratizing the answer” and we shouldn’t expect it from government. Bantas advises us to “reward products that are the result of circular economies and productions” by voting with our dollars.

Stroosnijder chimed in by highlighting the conversation taking place in the chat window during the presentation that formed around the concept of being a citizen, not just a consumer. “We do consider ourselves more than just consumers,” said Stroosnijder. “We also look at people in our country and in our network as more than consumers because we are more than just what we buy. We live somewhere, we work somewhere, we raise our kids somewhere. All that context influences the way we operate our businesses.

What Will It Take to Distribute Food More Equitably?